Idling Out on Take-Off!

There's a spot waiting for you!

Alisa Johnson and DeAnna Lovvorn Crush It On Caddo 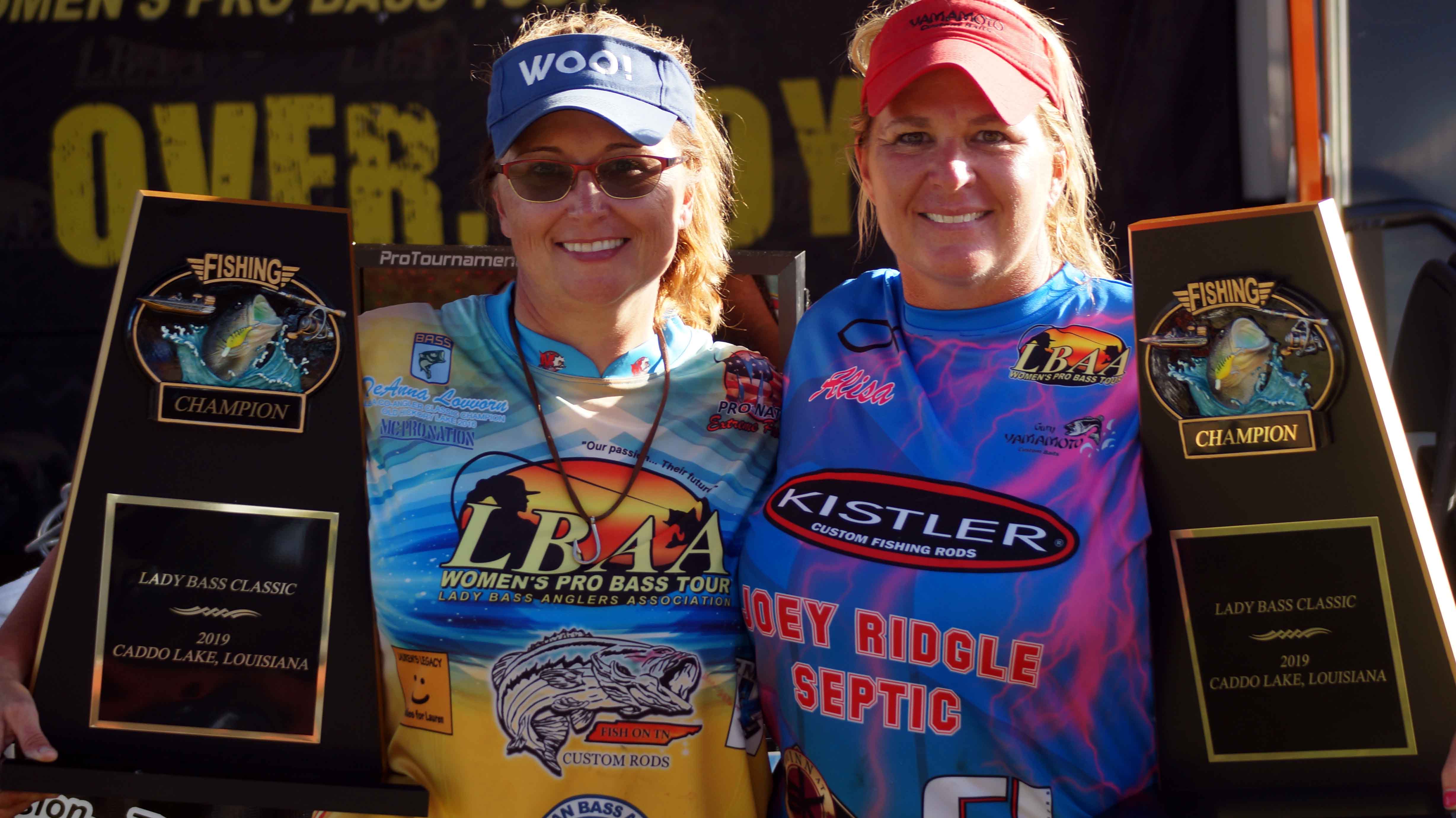 As the qualifiers for the 2019 LBAA Classic descended upon beautiful and mysterious Caddo Lake, they were greeted with scorching temperatures and sunny skies.

As the qualifiers for the 2019 LBAA Classic descended upon beautiful and mysterious Caddo Lake, they were greeted with scorching temperatures and sunny skies. The anglers braved the heat, low water conditions, and maze-like channels during practice in their search for a pattern and/or regions holding Caddo hogs.

Of course, as always seems to be the case with the LBAA, Thursday, the first day of the Classic, brought with it a complete change in the weather pattern. The boaters and non boaters said a prayer, and sang the national anthem, led beautifully by Penny McCurdy's niece Casey Boddie, and were off! A warm mostly sunny morning gave way to high winds and clouds by midday. Navigating the widest parts of the lake was tough as was adapting to the changing conditions. However, weigh in at 3:00 brought an incredible thrill! Alisa Johnson, a first year rookie pro from Texas, brought in an unbelievable sack of 5 largemouth bass weighing 20.38 pounds, one of the biggest sacks ever weighed in at an LBAA event!!! More remarkable is the fact that Alisa had overcome a traumatizing accident on Saturday, her first day of practice. Her boat crashed into a channel marker as she tried to avoid a stump, taking a big gash out of her Skeeter and nearly seriously injuring her. This event truly illuminates the courage and fortitude of the ladies of the LBAA. All of them must dig deep within themselves as they deal with the inevitable obstacles and adversities that come with serious tournament fishing. With the help of family and friends, Alisa powered on - coming in with a mind boggling bag of bass! WOW!! With 12.97 pounds, Mickie Wolfinbarger of Missouri was in 2nd place after Day 1, and Lisa Johnson of Alabama sat in 3rd with 11.59 pounds. Alison's lead was commanding! On the Co Angler side, Debbie Oswalt of Louisiana brought in a fantastic 13.48 pound sack of three bass, taking the lead in 1st. She was followed by Rachel Jones, also of Louisiana, with 5.57 pounds, and Daisy Brumley, another Louisiana angler, in 3rd with 5.24 pounds. All the ladies sure had their work cut out for them, but as Secret York put it, "On Caddo, you're only one flip away from a 9 pounder!".

As morning came on Day 2, the skies were ominous and Larry Valentine, the tournament director, wisely called for a delayed start due to lightning. By 7:45, and another great job singing by Casey, the anglers were off! The day was mostly overcast. Day 2's weigh in brought some drama and changes. Alisa still held on to 1st, bringing in a sack just over half of her Day 1 total with 12.3 pounds. Lisa Johnson brought in a huge bag weighing 17.09 pounds, and Terri Bittner of Arkansas, an inspiration to all the ladies as she battles through chemotherapy, leaped into 3rd place with 14.83 pounds. Lynda Gessner, also of Arkansas, and Mickie Wolfinbarger rounded out the top 5 on the Pro side. On the Co angler side, things were also shifting dramatically. Deb Oswalt still held 1st, bringing in 3 bass weighing 5.39 pounds, but surging forward was DeAnna Lovvorn of Tennessee with a terrific 11.04 pounds. Diana Uebelhack of Indiana jumped to 3rd with 5.82 pounds. Daisy Brumley and Christian Baxter of Alabama rounded out the top 5 on the Co angler side.

Day 3 of the Classic dawned with a beautiful, sunny, post frontal morning. After a final anthem by Casey, the stage was set for an exciting final day. A large and enthusiastic crowd gathered at Earl Williams Park to share in the festivities and witness the women on stage. First on stage was Arkansas pro, Lynda Gessner, who surged to 1st place with a 5 bass limit weighing 15.21, showcased by a 7.90 kicker! She sat on the hot seat in the beautiful Pro Gator boat, the LBAA's newest sponsor with a 3 day total of 39.08 pounds. Lynda would wait anxiously there until Lisa Johnson came to the scales with 5 bass weighing 12.93 pounds. Now Lisa sat in the hot seat and Lynda fell to 2nd. Wolfinbarger also brought in a good sack weighing 14.92, but not enough to unseat Lisa Johnson. At last, it was Alisa's turn to weigh in. She needed 8.93 pounds to get the victory over Lisa. And she DID it.....5 bass weighing 9.71 pounds to edge out Lisa! Alisa appeared in equal parts shocked and thrilled. She states, "Fishing the Classic my rookie year, I learned that mental toughness and family support is one of the most important parts of tournament fishing." Gessner ended up in 3rd place, followed by Wolfinbarger in 4th, and Terri Bittner rounded out the top 5. On the Co angler side, DeAnna Lovvorn was first on the hot seat bringing in 3 nice bass weighing 7.55 pounds. Sherry DeMuth of Indiana also had a super day, weighing in 3 for 8.16 pounds. Tension built as Day 1 and 2 leader Debbie Oswalt came to the stage. She needed over 2.17 pounds to unseat DeAnna, and in fact, she weighed in 2.46! Unfortunately, a 1/2 pound dead fish penalty on Day 1 turned out to be the difference! What a heart breaker! DeAnna Lovvorn was the 2019 Classic Co angler champion. DeAnna says, "my approach has always been Improvise. Adapt. Overcome. Being a co-angler, you have to adapt to your situation. You are not in control of where you are going or how your boater will fish." Sherry DeMuth finished 3rd, Rachel Jones 4th, and Daisy Brumley rounding out the top 5. Winning Julie Martin Foundation Big Bass on the pro-angler side was Lynda Gessner with her 7.90 pound pig, and Gabriela Trevino on the co-angler side with a 6.76 pounder!

A huge thanks goes out to ALL who pitched in and helped to make the 2019 Lady Bass Angler Association Classic a tremendous success! Tournament director Larry Valentine summed it up best, "The 2019 LBAA year end Classic was an amazing event to be a part of and watch unfold. Each day the suspense built as the fish were brought to weigh in. Each day the events of the day became a reality in a more precise manner. From the take off in the morning to the return in the evening, the events took place as if they were a practiced and choreographed dance. All I can say ladies is "Fantastic!". You put on an awesome show that was a joy to be a part of! I know each and every one of you had fun because I did, and it was fun to watch. Watch out 2020 - here comes the Lady Bass Anglers Assocation!".

To see more about the anglers and the wonderful outpouring of support, please see our digital magazine located at https://www.ladybassanglers.com/2019Classic/ .
This event was sponsored by the Shreveport-Bossier Sports Commission. Additionally, the Lady Bass Anglers Association is so blessed to have an amazing group of sponsors. Please check them out: Old School Outdoors, HiTec Outdoors, Donely’s Marine, Lauren’s Legacy, Indigo, Sabine County, Fin and Feather, Six Mile Marina, Julie Martin Foundation, Picky Vicky’s, Vickie’s Threadworks and Yo-Zuri.

The Women's Pro Bass Tour now turns its' attention to the culminating event of the 2021 season. The LADY BASS CLASSIC will be held September 16-18, 2021 on Lake Logan Martin!  Anglers anglers in this event qualified through the Angler of the Year points, or the Wildcard Event or Draw. This years field will also be joined by anglers from the two Women's Pro Bass Tour Federations: WBT Tri-State Federation and the newest, the Indiana Bass'n Gals! Join us for the weigh-in each day live or through our Lady Bass Anglers Association Facebook Live Show at 3:30 PM each day. Follow the links for more on membership and tournament registration!

The Lady Bass Anglers Association's 2021 season will wrap us soon with the season culminating LADY BASS CLASSIC! This event will take place on Lake Logan Martin in Lincoln, Alabama.  The dates are September 16-18, 2021 at the new Lincoln's Landing Fish Park. Join us for for the weigh in each day at 3:30 PM. either in person or via Facebool Live! We invite you to join in the action packed adventures with best female anglers in the country!