Fishing a professional tournament circuit can be daunting to say the least. Being a co-angler on any fishing circuit can run the gauntlet of emotions – taxing, frustrating, fun, physically demanding, costly, and downright intimidating at times. Recently I got together with Lady Bass Anglers Association (LBAA) members Kim Giddens and Bonnie Ward about their co-angling experiences. 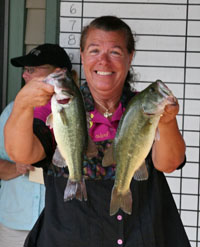 Ward had made no prior arrangement to practice going to Dardanelle but LBAA pro angler Patti Campbell connected Ward with Cheryl Bowden and Ward got two full days of practice in at the LBAA inaugural tournament in Russellville, AR.

“I am always appreciative of getting to practice,” Ward continued. “Practice gives me more confidence on the waters that we fish in the LBAA, as they are very different from the bodies of water that I fish at home.”

She went on to say that one thing she learned at Dardanelle was “the importance of teamwork.”

“Even though the pro angler and the co-angler are in two different tournaments, it’s important to help each other to achieve the same goals – whether it is being quick on your feet to net that fish or sharing lures and techniques that work,” Giddens added.

Both women heartily encourage others overcome any fears or doubts and come fish with the LBAA. “Get yourself a good support system and go for it,” Ward quipped.  “I would have never fished my first tournament if not for my husband. I was terrified of everything that crossed my mind, but for every reason I came up with not to try fishing my first ladies tournament, my husband came up with two reasons why I should,” Ward added with a smile.

Giddens spoke up and said, “Until I fished the LBAA last year I had only fished with my husband Marty. The Giddens’ up until last year had been fishing against other couples and against other two-man teams.

“Nothing against all of that,” Giddens stated “but it is so great competing in a tournament with and against women that love the sport as much as I do.”

Ward chimed in with a tone of excitement as well, “What I felt, and so enjoyed, was the air of excitement that the tournament(s) and the LBAA carry with it. I also loved the appreciation that was shown for folks like Cheryl and Secret, the board of directors, and those who work behind the scenes at stepping up and working so tirelessly to give us ladies a place to fish together.”

It is common knowledge that there are both plusses and minuses of being a co-angler and Giddens and Ward freely discussed those with me.

Ward pondered the question and then posed this to us, “I think the answer to that depends on who or where, you are as a co-angler.”            Kim Giddens

“Some are co-anglers because they are gaining experience before they take the next step, some because they can’t take enough time off work to spend the time they feel would be necessary to be a good boater, and some because that is their comfort zone,” Ward went on to say.

“As far as me,” Ward went on to say, “I fish as a co-angler as that is the only feasible option due to where we live and the location of the tournaments.  So, it is either being a co-angler and loving it, and learning from it and fish with the LBAA -- or not fish at all.”

“Those who know me,” Ward smiled as she spoke, “know going fishing and being a part of the LBAA is – the only option!”

Giddens likes weighing out the plusses and minuses of being a co-angler.

Giddens went on to speak about the negatives, “The biggest to me is not being able to choose the fishing spots.”

What are the co-angler necessities? What would be three things that you recommend every co-angler possess in their fishing arsenal?

“A pair of pliers, a shaky-head rig and a great crank bait,” Giddens said.

Ward however, seemed to grasp the spirit of a great philosopher with her profound answer.

“Weightless plastics as a sign of patience, a 12” swim bait as it is indicative of a positive attitude, and a culling

system that means you have the confidence you need,” she stated. She quickly went on to add, “Seriously, the biggest thing is to fish your strengths and adapt them to the situation with which you are presented.”

Every two-person team also has a pro angler so what about the pro angler and your dealings with them during a tournament?

“Have a positive attitude from the minute you meet your boater until you step off of her boat the next day,” Ward said. “Most of the ladies are great, and you may be surprised to find out that most of them really want their co-anglers to catch fish.”

Both Ward and Giddens spoke about how the co-angler must be respectful of their pro angler – her equipment, her water, and how she fishes.

“Find out immediately what your pro angler expects from you,” Giddens added with a serious tone.  “For example, should you go for the net each time unless she calls you off. And, when she starts pulling the trolling motor up, you need to have your gear secured and your life vest on.”

Both also have advice to offer any woman who is contemplating becoming a co-angler and fishing with the LBAA.

“Don’t hesitate to join us,” Ward quickly said enthusiastically. “You will fish with and learn from some great anglers. I could write a book on the positive experiences I have had. Every time I step into the back of another lady’s boat, I learn something new. You will meet people from all over the United States, travel to places you may otherwise not ever see, and fish lakes you have heard about but may not ever get to fish if it were not for the LBAA.

Come and be a part of the great family of women who share the same passion for fishing that you do and make some great friends along the way.”

Giddens said the best advice she could give is the same advice her husband gave to her.

“He asked – Do you love to fish? Do you enjoy competition? Are you getting any younger?”

Giddens concluded with a smile, “If you answer yes, as I did, you need to sign up with the LBAA today!”